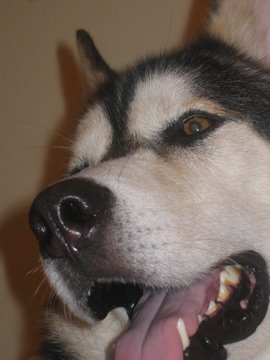 I'm officially calling for a "Take a Malamute to Work Day" because it's just selfish to keep these bundles of energy and mischief all to ourselves.
Posted by red rabbit at 11:22 PM No comments:

Ann Coulter Needs to Be Kicked in the Neck

There is no way to get around it anymore. Ann Coulter is way overdue for a good old-fashioned ass-kicking. I'm actually pretty astounded it hasn't happened yet. Oh there was the failed pie incident. But I'm talking about one of those satisfying knock down drag outs. In fact if were Ann (before I gave the world a break and retired, taking a vow of silence for good measure), I wouldn't make a move without an army of bodyguards, a bulletproof car, and my own private arsenal.

Ann is impossible to humiliate because she doesn't understand the nature of humility. If she did she wouldn't have a career. One cannot humiliate her on an intellectual level because she's too stupid to know when she's been out-argued. Having failed in the realm of ideas, it is now time to move to the realm of fisticuffs. Those of us who have ever faced down a schoolyard bully and lived to tell about it, know what happens in a fight. There is no humility like doing your damndest to try and not go out like a punk. At that moment it doesn't matter how clever or pretty or right you may think you are. All that matters is that the other person is out to beat you up and you either have to put up a good fight or just get beat. And until Ann has to face down someone who seriosly wants to kick her bony ass, she will never understand humility.
Posted by Lenora at 5:00 PM No comments:

"Ann Coulter Needs to be Kicked in the Neck" has been preeempted for some actual news.

According to Bart Gellman's review of Ron Suskind's new book the following things are true:

(link via Atrios)
Buy the book.

*Brandon Boyd
Posted by Lenora at 5:11 PM No comments:

I would buy Obama's deference to leaders in the Democratic party if I felt that were any leaders in the Democratic party (Anyone? Anyone?) but he doesn't seem to want to fill the void and so we end up with a bland parsing pol who spends all of his time trying to not leave anything distinctive on his permanent record...and we already have an Evan Bayh. Personally I'm tired of Democrats who are obsessed with process and talking about how they need to get their message out. There comes a time to decide what you stand for...and then stand for it.

I don't have a horse in the 2008 Presidential election and I'll vote for any Democrat short of the Joe's (Lieberman and Biden), I only have one requirement for my candidate: someone who can win. And for that, and because both parties bases are pretty much set in stone, you need someone who can excite the mushy middle (also known as the "independents") and I don't think that you can get them off the couch them with more mush.

If you want to lead the party, then lead. Otherwise stop wasting my time and sucking the air out of the room...

Word. Obama, contrary to what he seems to think, at this point probably has the least to lose by taking a bold stand on something. Being both near the bottom of the list in the Senate and one of the most popular Democrats out there puts him in a position to take a risk. I understtand wanting to build a record before making waves, but when he Republicans control everything and the casualty rate in Iraq is creeping up to 3,000, there is little time for process and caution. Obama should take a cue from the lukewarm response to Hillary's baby steps onto the campaign floor, another junior senator who could have set the pond and fire and did not.

Okay I'll stop picking on Barack for now. Next up, why hasn't someone punched Ann Coulter in the neck.
Posted by Lenora at 8:44 AM 2 comments:

I would like to offer some advice to my fellow pundits: face reality. There are some commentators who long for the bipartisan days of yore, and flock eagerly to any politician who looks "centrist." But there isn't any center in modern American politics. And the center won't return until we have a new New Deal, and rebuild our middle class.

Republican methodology to divide and conquer the middle class, both against itself and against the lower classes, is something that seems to hamstring the Dems on two levels. On one level, they are compelled to counter arguments regarding Gay marriage, etc. thereby entering into an argument they cannot win largely because the problem doesn't really exist in the frist place. On another, some of them (cough Leiberman) are beholden to the same rich constiuency that the Republicans favor. When Democrats run "centrist" campaigns (and notice that it is usually Democrats and not Republicans that make a big show of centrism)they're falling into trap of trying to unite artificially divided constiuencies.

O'Reilly Vs, Stewart (via Atrios)

Responding to a segment on the June 13 broadcast of The Daily Show during which host Jon Stewart satirized O'Reilly's recent trip to Guantanamo Bay, Cuba, O'Reilly suggested that Abu Bakar Bashir -- the extremist religious leader recently released from prison where he was serving time for his role in the 2002 Bali terrorist attacks -- could "bunk with" Stewart "when he comes to the USA." O'Reilly then characterized his own "program" as "serious" -- as opposed to Stewart's "comedy show" -- and asserted that while being "a smart guy," Stewart has taken to pandering to the "[d]opey college kids" who "are gonna watch him."

Bring it on Bee-oo--tch. Seriously, this little feud is already over. O'Reilly's got nothing. If you read the transcript of the show, it sounds like a criticism leveled at Pink Floyd when The Wall was first released. But, hey, if Bill wants to stir shit up with Jon, let him. I have a feeling Jon knew exactly what he was doing when he did that bit about O'Reilly at Gitmo.
Posted by Lenora at 8:10 AM 1 comment: