Well, it appears that Palin and her family arrived for the convention with very little in the way of clothes and certainly not ready for the glare of the national stage. Bristol's boyfriend's hair, for example, was such a mess that he basically had dread locks. After a 10-minute, high-level discussion it was decided he must get a haircut (I believe the RNC picked up the tab for that too)...

Well, anyway, it was decided to shop at Neiman because Neiman Marcus is a truly full service department store: the sales team brought the department store to the hotel, bringing racks of clothing for the Palins to try on. This was apparently easier and more practical than browsing the racks at TJ Maxx. More expensive, too.

This was in reference to the big, big shopping spree ($150,000!!) Sarah Palin won as a bonus prize for appearing at the RNC and agreeing to be John McCain's "flair" running mate. Governor Palin, come on down!

Wow. $150,000 is more than most real Americans spend on hearth and home in a lifetime. Well, maybe half a lifetime. Do you think they'll let her keep the swag?

No word on whether Levi Johnston's dreadlocks signified spiritual intent, natural and supernatural powers, or were a statement of non-violent non-conformity, communalism and socialistic values, and solidarity with less fortunate or oppressed minorities.*

Silveradept, in comments, asked for links to a study or report ranking post-WWII U.S. presidents that would bear out the list posted below. I asked John at Progressive Involvement who said he posted an email he received and had no links to share. I did a little digging and found the tables below. 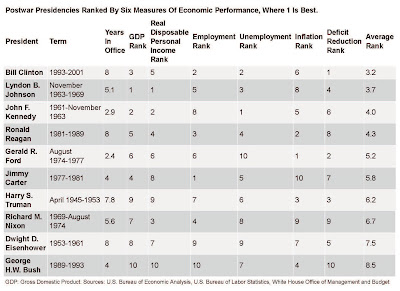 According to Forbes, Bill Clinton ranks first among the 10 postwar presidents overall, with LBJ and JFK in the top three, but Ronald Reagan is ranked above both Truman and Carter.

The US Misery Index says Eisenhower presided over a less miserable country than the other nine. 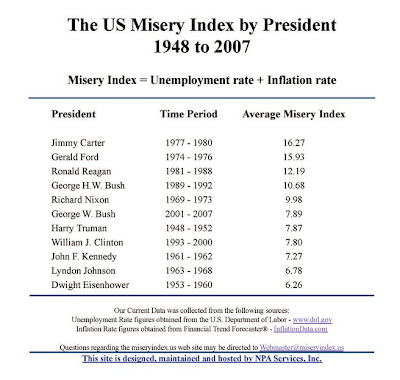 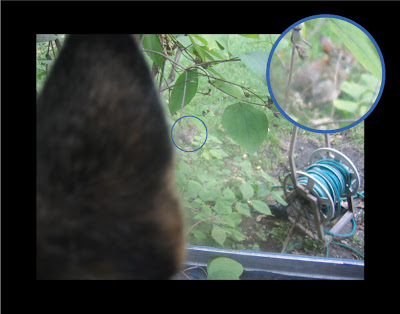 The other day a bunny frolicked in the yard for a good couple of hours. Kodi was beside himself. This is the least blurry photo of the afternoon.
Posted by red rabbit at 1:47 PM No comments:

John Petty over at Progressive Involvement checks the record from WWII to the present:

2. The highest growth in jobs – Clinton

8. The largest reduction in deficit – Clinton

Think what our elections would be like if only our public education system worked.
Posted by red rabbit at 10:23 AM 2 comments:

Gawkers Look Elsewhere, or Better Yet, Get A Life

Jeez! The howls of indignation. Grow up, people. Yes, it's gone; that oh-so-exciting post that people can't seem to get enough of. We know deleting doesn't erase it from memory. Like so much urine in a swimming pool, trace elements will remain.

For those of you trolling this site for dirt on Obama and Ayers, please look elsewhere. Red Rabbit and the rest of us have said our piece which doesn't amount to much beyond that yes there was an event which we attended and which has been part of public record for years. If you want to have a serious debate on how progressive Obama truly is then we can talk. But judging from the traffic stats and the comments I doubt that's what you're looking for.

This site has been pretty hard on Obama but has always criticized him from a progressive standpoint. Quite frankly the accusation that Obama would have a terrorist agenda is laughable considering what a cautious politician he is. Nor should Ayers be tried anew for his weather underground activities. His radical bonafides are so outdated, calling him a terrorist is giving him way too much credit.

So go to the Boston Globe, or Politico.com or wherever else we've been quoted. As for us, this blog is independently run, and reserves the right to pull material, specifically if that material hurts the blog at large. Moreover the post in question was up LONG before this election and in the last several months has been woefully distorted to slander a private citizen.

Meanwhile, shouldn't you look to your own candidate? He ain't doin' so well.
Posted by Lenora at 11:30 AM 40 comments: