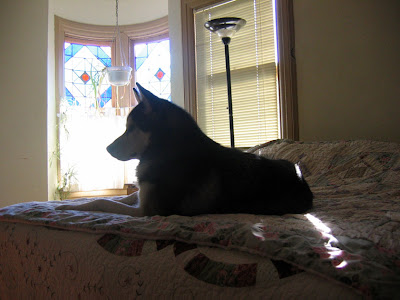 We were traveling a lot last month, but we've been home for weeks and Kodi still hasn't given up the bed.
Posted by red rabbit at 10:40 PM 4 comments:

The Holiday Party is Going to be Pretty Awkward

An increasing number of left-wing commentators assert that Reagan kicked off his 1980 presidential campaign with a states’ rights speech in Philadelphia to send a signal to white racists that he was on their side. The speech is taken as proof that the Republican majority was built on racism.

The truth is more complicated.

In reality, Reagan strategists decided to spend the week following the 1980 Republican convention courting African-American votes. Reagan delivered a major address at the Urban League, visited Vernon Jordan in the hospital where he was recovering from gunshot wounds, toured the South Bronx and traveled to Chicago to meet with the editorial boards of Ebony and Jet magazines.

On Friday, Krugman decides that he can't let that pass.

Indeed, you do really have to feel sorry for Reagan. He just kept making those innocent mistakes.

When he went on about the welfare queen driving her Cadillac, and kept repeating the story years after it had been debunked, some people thought he was engaging in race-baiting. But it was all just an innocent mistake.

When, in 1976, he talked about working people angry about the “strapping young buck” using food stamps to buy T-bone steaks at the grocery store, he didn’t mean to play into racial hostility. True, as The New York Times reported,

The ex-Governor has used the grocery-line illustration before, but in states like New Hampshire where there is scant black population, he has never used the expression “young buck,” which, to whites in the South, generally denotes a large black man.

But the appearance that Reagan was playing to Southern prejudice was just an innocent mistake.

The Reagan story forms the centerpiece of Krugman's argument in The Conscience of a Liberal that race, far more than economics or foreign policy or "values," is what gave Republicans an electoral majority for most of the past 40 years. At the end of his calumny column, when Brooks elaborates on the "slur," it sounds an awful lot as though he's really talking about Krugman's book: "It posits that there was a master conspiracy to play on the alleged Klan-like prejudices of American voters, when there is no evidence of that conspiracy."

And today, Bob Herbert steps into the fray to back Krugman up.

He was tapping out the code. It was understood that when politicians started chirping about “states’ rights” to white people in places like Neshoba County they were saying that when it comes down to you and the blacks, we’re with you.

And Reagan meant it. He was opposed to the landmark Civil Rights Act of 1964, which was the same year that Goodman, Schwerner and Chaney were slaughtered. As president, he actually tried to weaken the Voting Rights Act of 1965. He opposed a national holiday for the Rev. Dr. Martin Luther King Jr. He tried to get rid of the federal ban on tax exemptions for private schools that practiced racial discrimination. And in 1988, he vetoed a bill to expand the reach of federal civil rights legislation.

Let's leave aside the fact that Brooks should know better than to launch these pebbles at Krugman, and focus for a moment at the substance of his "outrage". Brooks isn't as clever as he thinks he is, but he's clever enough. He's careful to call accusations of racism on the part of Reagan a "slur" carefully turning the rhetoric of bigotry around to reflect badly on the part of liberals. Reagan gets to be the victim of racism by being wrongly identified as racist. He also locates the "slur" in a conspiracy that sees a racist agenda where none exists. Liberals can cry wolf but the worst one can accuse Reagan of is being "callous."

Brooks paints a picture of a somewhat chaotic moment in the campaign, which gives the illusion of detail but manages to avoid laying blame at the feet of any one person. "The decision was made to go to Neshoba. Exactly who made the decision is unclear." But, oops! That sticky phrase "states rights" made its way into the speech, and by the way don't you dare imply that the Greatest President Ever was a racist.

Brooks even attempts to cast doubt on the character of White Southern Voters in 1980 referring to the "alleged Klan-like prejudices of American voters." It's all part of Brooks' schtick. It's interesting to read that sentence while listening to This American Life's rerun of "Harold" which documents the extraordinary election of Harold Washington. During a radio interview, a caller called asking Harold if he would be replacing the elevators with vines once elected. But in Bobo's world, problems don't really exist until those partisan liberals start their hype.

Krugman and Herbert do a pretty good job of demolishing Brooks in highlighting all of Reagan's best moments. But they miss the real problem with Brooks. Brooks is basically dishonest. He'd probably be forced to concede every point made by his two more able colleagues, but it wouldn't matter. Each instance, rather than evidence of institutionalized racism, is merely a far more benign policy grossly misconstrued by partisan liberals. Because at the end of the day, it doesn't matter to him whether Reagan was a racist or not; it's more about casting doubt on what constitutes racism in the first place.
Posted by Lenora at 7:19 AM 1 comment:

A political execution in Chicago 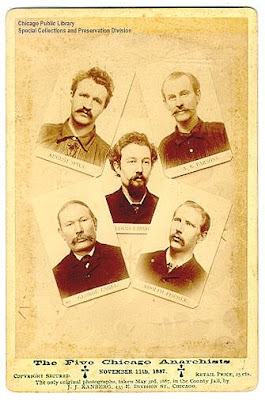 "The time will come when our silence will be more powerful than the voices you strangle today." --last words of August Spies just before he was hanged November 11, 1887.

Although Labor day, or May Day, is traditionally when the country honors its workers, and socialists and labor unions celebrate their heroes and martyrs, today, November 11, marks the anniversary of the execution of four of the seven anarchists convicted of consipiracy to commit murder in the Haymarket Riot that took place in Chicago on May 4th, 1886. Albert Parsons, August Spies, Adolf Fischer, and George Engel, all German nationals, members of the International Working Peoples Association (IWPA), the group that organized the campaign for the eight-hour workday, were hanged for their anarchist opinions.

The beginning of the end for them does begin on May 1st, 1886, when a strike in support of an eight-hour workday gathered force all over the US.

Both the Democratic and Republican mainstream political parties offered little hope for disgruntled and downtrodden workers both immigrant and American-born, so doctrines like anarchy, socialism, communism, feminism and labor activism sprouted in the political soil of late-19th-century America.

During the days that followed over 340,000 workers walked off their jobs. In Chicago the IWPA organized a rally where 7,400 striking workers gathered. Unprovoked, the police opened-fire on the crowd, killing four people.

The following day August Spies, who was editor of the Arbeiter-Zeitung, published a leaflet in English and German entitled: Revenge! Workingmen to Arms! It included the passage:

"They killed the poor wretches because they, like you, had the courage to disobey the supreme will of your bosses. They killed them to show you 'Free American Citizens' that you must be satisfied with whatever your bosses condescend to allow you, or you will get killed. If you are men, if you are the sons of your grand sires, who have shed their blood to free you, then you will rise in your might, Hercules, and destroy the hideous monster that seeks to destroy you. To arms we call you, to arms."

Over 3,000 people were rallying in Haymarket on May 4th when a bomb exploded killing one policemen and injuring dozens of others.

"The police then immediately attacked the crowd. A number of people were killed (the exact number was never disclosed)and over 200 were badly injured."

Martial law was declared in Chicago and the "Red Scare" took hold of the country. Chicago prosecutor Julius Grinnel famously said "Make the raids first and look up the law afterwards." The prosecution of the seven workers was built around the speeches and writings of the defendents, since it could not be proven that any of the men were at Haymarket at the time the bomb went off.

During the trial the judge allowed the jury to read speeches and articles by the defendants where they had argued in favour of using violence to obtain political change. The judge then told the jury that if they believed, from the evidence, that these speeches and articles contributed toward the throwing of the bomb, they were justified in finding the defendants guilty.

Ken Warren writes in Black and White Strangers, that no less a personage than William Dean Howells, American author and literary critic, petitioned the governor of Illinois to commute the death sentences, calling them "a fundamental assault on political dissent." After his appeals fell on deaf ears and the executions were carried out, Howells wrote:

We had a political execution in Chicago yesterday. The sooner we realize this, the better for us.

As Ed Tant writes the Haymarket tragedy involved political elements all too familiar: government surveillance, police misconduct, immigration, and workers' rights. Today we take the eight-hour workday for granted, just as we take the First Amendment as a birthright. We would do well to heed the words of Mr. Howells and mark the anniversary of the Haymarket tragedy as an important history lesson.