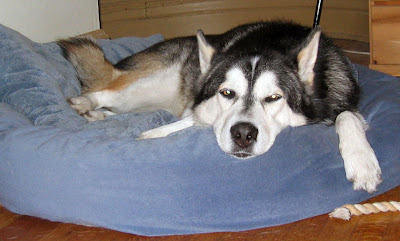 Wake me up when the election is over.
Posted by red rabbit at 3:04 PM 2 comments:

Going through old papers this weekend I found a Harper's Magazine from May 2006 with a piece by Michael Hudson on the upcoming crisis in real estate debt, titled The New Road to Serfdom. Writes Mr. Hudson:

Most everyone involved in the real estate bubble thus far has made at least a few dollars. But that is about to change. The bubble will burst, and when it does, the people who thought they would be living the easy life of a landlord will soon find out what they really signed up for was the hard servitude of debt serfdom.

But homeowners are not the only ones who will pay. The overall economy likely will shrink as well. That $200 billion that flowed into the "real" economy in 2004 is already spent, with no future capital gains in the works to fuel more such easy money. Rising debt-service payments will further divert income from new consumer spending. Taken together, these factors will further shrink the "real" economy, drive down those already declining real wages, and push our debt-ridden economy into Japan-style stagnation or worse.

It's instructive, isn't it, to find that our current economic woes were not only predictable but predicted? Along with Hudson, the redoubtable Paul Krugman was also one of those sounding the alarm, while most of the political and economic media continued to do what it always does, namely, conspire to render the obvious invisible--invisible, that is, until it becomes impossible to ignore. Then, of course, a phalanx of blowhard analysts gets marched out to prattle on endlessly about why no one saw this coming.

Likewise on the campaign trail, Obama supporters have been sent reeling by news that a 1995 fundraiser at the home of Bill Ayers and Bernadine Dohrn (a meeting mentioned three years ago on this blog) has now become a "thorn in the side" of the Obama campaign. The rightwing, with assists from Ben Smith over at Politico.com (whom we warned about the left-baiting course of his reporting on this) and George Stephanopolous at last week's debate, have sought to make Obama's supposed radical ties something he needs to answer for, when the real question all along has been why have progressive elements both inside and outside the Democratic party insisted that we rally around the centrist junior senator from Illinois? Like every Democratic presidential candidate in recent memory, Obama's claim to fitness for the highest office in the land rests on his presenting himself as a different sort of Democrat, one willing to question central tenets of Democratic party principles. In essence, he has presented himself as someone willing to embrace Republican talking points on healthcare, social security, and putative self-destructive behavior of the black poor, thus distancing himself from the commitments that distinguish the party from its opposition.

But this merely gives the Republicans the formula for attacking him: Play up his ties to the left. Undercut his claims to being something different by linking him with liberals and lefties (links which will inevitably be there even if one happens to be a weasel like Joe Lieberman), then present him to the public as a two-faced liar. For this purpose, an association with Ayers serves quite nicely, but even a fine policy distinction like insisting on restricted healthcare mandates for parents, would be enough for the Republicans to find duplicity in Obama's "I'm not your daddy's Democrat" sales pitch.

Of course, the only way for a Democratic candidate to avoid getting "exposed" as being more to the left than s/he purports to be is to actually run on the left, that is, to embrace proudly egalitarian and redistributive politics and then demonstrate why a Democratic party that upholds these values is the best party for the nation. And isn't it funny, that the Democratic party had such a candidate in John Edwards, but the party leadership couldn't quite get itself together to back him? Instead we're likely to have in November a candidate who is vulnerable, as so many of his predecessors have been vulnerable, to the same old same old from the Right.
Posted by Anonymous at 4:20 PM No comments: