Why is Obama pandering to anti-gay bigots?

Because anti-gay bigots are sometimes also members of the religious right? Or did Barack think sponsoring a "Gospel Tour" in South Carolina would help him shore up his bonafides in the black community there and elsewhere? Maybe both. But Obama is treading on thin ice here. Among the Gospel singers performing on the tour is Donnie McClurkin who

...has detailed his struggle with gay tendencies and vowed to battle "the curse of homosexuality," said yesterday he'll perform as scheduled at the Republican National Convention on Thursday, despite controversy over his view that sexuality can be changed by religious intervention.

Donnie McClurkin is in denial on so many different levels it makes me dizzy.

Why would the senator risk the votes of two traditionally Democratic constituencies that don't require pandering to? I 'm referring to gay and lesbian voters*, and voters who want to preserve the separation of church and state.

*maybe this should be qualified to read "openly gay and lesbian voters" since there's been a rash of news items involving sexually confused Republicans that have embarrassed the GOP.
Posted by red rabbit at 2:16 PM 8 comments:

Cliff May is a Moron


Cliff May, president of the Foundation for the Defense of Democracies, apparently suggested that Hillary Clinton be referred to as a "Vaginal-American."

Sure. Then let's all start calling Cliff May a Dick.
Posted by red rabbit at 5:57 PM 1 comment: 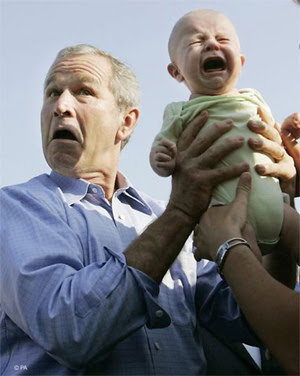 It's not just a TV show that's losing viewers! It's Bush's job approval rating, according to Zogby.

Consider this number in the context of other Presidential approval ratings:
Bush is pathetic.
Posted by red rabbit at 4:35 PM No comments: