Adolph Reed's lastest gem on Barack Obama in this month's issue of The Progressive brought to mind Robert Preston in his finest role:

Obama’s style of being all things to all people threatens to melt under the inescapable spotlight of a national campaign against a Republican. It’s like what brings on the downfall of really successful con artists: They get themselves onto a stage that’s so big that they can’t hide their contradictions anymore, and everyone finds out about the different stories they’ve told different people. And Obama’s belonging to Wright’s church in the first place was quite likely part of establishing a South Side bourgeois nationalist street cred because his political base was with Hyde Park/University of Chicago liberals and the foundation world.
...
Because he’s tried carefully to say enough of whatever the audiences he’s been speaking to at the time want to hear while leaving himself enough space later on to deny his intentions to leave that impression, his record represents precisely the “character” weakness the Republicans have exploited in every Democratic candidate since Dukakis: Another Dem trying to put things over on the American people.

Obama’s campaign has been very clever in carving out a strategy to amass Democratic delegate votes, but its momentum is in some ways a Potemkin construction—built largely on victories in states that no Democrat will win in November—that will fall apart under Republican pressure.

Once again, Professor Reed doesn't let us down. Not only does he speak truth to power, he's speaking truth to the bamboozled Left, lost in the afterglow of its collective Obasm.

I think its too late to prevent them from embarrassing themselves (I'm looking at you, editorial board of The Nation, Katha Pollitt, and for God's sake, Barbara Ehrenriech, who wrote, on Valentine's Day, no less, about being swayed by her "grown feminist daughter" weeping inconsolably when Obama lost NH. Sheesh!). We can only hope that, if Obama does win the nomination, the Democrats can pull themselves together and figure out how to build this deeply flawed candidate into someone who can win in November without compromising away all of the things that would make a victory matter in the first place.

And then, maybe, we can all march out of the high school gym to the strains of 76 Trombones.
Posted by red rabbit at 1:05 PM 2 comments: 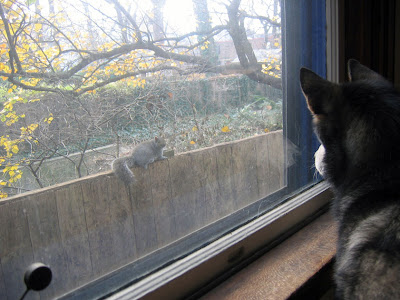 Squirrel watching. Or squirrel, watching.
Posted by red rabbit at 10:46 AM 1 comment:


Mike Huckabee has just moved to the top of the shit list. I'm not shy about making Obama the butt of a good joke, but this isn't funny:

“That was Barack Obama, he just tripped off a chair, he's getting ready to speak,” said the former Arkansas governor, to audience laughter. “Somebody aimed a gun at him and he dove for the floor.”

And the audience laughed. Of course, he was giving a speech to the NRA in Kentucky. Check out the youtube video
Posted by red rabbit at 4:58 PM No comments:

This just doesn't get old.

Thanks Felicia!
Posted by red rabbit at 11:26 AM No comments: