I've often thought the last 6 1/2 years under BushCo have been right out of a badly written B-movie. And the writing gets worse every year.

There are undeniable benefits to having Starr, the US Solicitor General under President George H.W. Bush, represent Blackwater--a highly partisan GOP company--in front of a Supreme Court stacked with Bush appointees. Starr also has a personal connection to Blackwater. Starr and Joseph Schmitz, the general counsel and chief operating officer of Blackwater's parent company, the Prince Group, have both worked closely with the arch-conservative Washington Legal Foundation. Since 1993 Starr has served on the legal policy advisory board of the organization for which Schmitz has frequently acted as a spokesperson and attorney.

Still, I think it shows a definite lack of imagination.
Posted by red rabbit at 5:20 PM 1 comment:

Posted by red rabbit at 3:49 PM No comments:

And the hits just keep on comin'

The male escort responsible for the downfall of Christian evangelist leader Ted Haggard is now alleging that embattled Senator Larry Craig also came to see him.

Posted by red rabbit at 3:02 PM No comments:

Quote of the Day 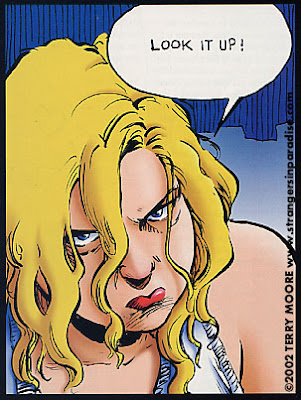 The best quote I've seen on a blog in a long time:

I'm a librarian, motherf**ker, you couldn't shock me if you tried.

Told you they were pissed.

Hat tip to silveradept at Nonsensical Ravings of Finely Tuned Insanity for the highly entertaining and thought provoking link.
Posted by red rabbit at 11:03 AM No comments:

Oh my God. What a buffoon. And that laugh? His prime example of getting ahead in life: Bill Clinton getting laid in college. What a creepy, pathetic guy.

Hmmm...if that embedded link seems to be stalling, try this one:

Mark my words, librarians will be on the front lines when the revolution comes. Don't believe me? In 2003 the NYT reported librarians went to federal court "to gain permission to identify themselves as the recipients of the secret subpoena, known as a national security letter, ordering them to turn over patron records and e-mail messages."

Lawyers for the group, the Library Connection of Windsor, Conn., argued that their client was eager to participate freely in the debate last year over the reauthorization of the Patriot Act. But federal prosecutors asserted that the Patriot Act required that the group's identity remain secret and that the government would suffer irreparable harm if any information about its investigations became known.
...
"We are obviously very much looking forward to the day where they can explain how it felt to be under threat of criminal prosecution for merely identifying themselves," said Ann Beeson, the civil liberties union's associate legal director. "The clients are happy that the fight over this gag is nearing its end."

In Europe, librarians joined with The Electronic Frontier Foundation to demand fixes to vague copyright law that would potentially criminalize websites, internet service providers and librarians.

This group is organized and some of them are pissed. A healthy combination.

Thousands of protesters are dead and the bodies of hundreds of executed monks have been dumped in the jungle, a former intelligence officer for Burma's ruling junta has revealed.

The most senior official to defect so far, Hla Win, said: "Many more people have been killed in recent days than you've heard about. The bodies can be counted in several thousand."

Mr Win, who spoke out as a Swedish diplomat predicted that the revolt has failed, said he fled when he was ordered to take part in a massacre of holy men.

Reports from exiles along the frontier confirmed that hundreds of monks had simply "disappeared" as 20,000 troops swarmed around Rangoon yesterday to prevent further demonstrations by religious groups and civilians.

Word reaching dissidents hiding out on the border suggested that as well as executions, some 2,000 monks are being held in the notorious Insein Prison or in university rooms which have been turned into cells.

There were reports that many were savagely beaten at a sports ground on the outskirts of Rangoon, where they were heard crying for help.

Others who had failed to escape disguised as civilians were locked in their bloodstained temples.

There, troops abandoned religious beliefs, propped their rifles against statues of Buddha and began cooking meals on stoves set up in shrines.

And now the whereabouts of U.N. envoy Ibrahim Gambari are unknown. MSNBC is reporting the question of where is Gambari, but does not mention the massacre of thousands. CNN is not reporting this story either. BBC is reporting "thousands of monks 'to be sent away'" but no mention of a massacre.

Update: Well now the MSNBC link has been changed to "Envoy set to meet Myanmar's junta leader." So I guess he's accounted for. That's a relief.
Posted by red rabbit at 12:57 PM No comments: 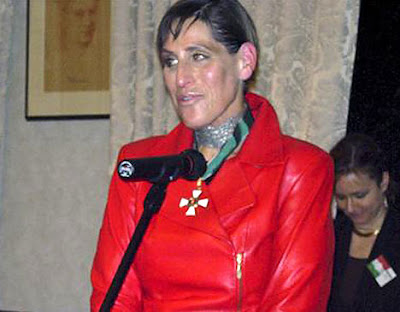 Debra Cagan, Deputy Assistant Secretary for Coalition Affairs to Secretary of Defense Gates, wearing what appears to be a fascist medal over a flaming red leather jacket, shocked British MPs by stating that she "hates all Iranians."

"She is very forceful and some of my colleagues were intimidated by her muscular style."

The Pentagon denied this and declined to comment on her outfit.
Posted by red rabbit at 12:42 PM 3 comments: