BAGHDAD (Reuters) - Iraq's government has lost control of vast areas to powerful local factions and the country is on the verge of collapse and fragmentation, a leading British think-tank said on Thursday.

Chatham House also said there was not one civil war in Iraq, but "several civil wars" between rival communities, and accused Iraq's main neighbors -- Iran, Saudi Arabia and Turkey -- of having reasons "for seeing the instability there continue."

"It can be argued that Iraq is on the verge of being a failed state which faces the distinct possibility of collapse and fragmentation," it said in a report.

"The Iraqi government is not able to exert authority evenly or effectively over the country. Across huge swathes of territory, it is largely irrelevant in terms of ordering social, economic and political life."

The empty flightsuit has failed miserably. He's broken our government, our military, our "free press," and thousands of lives. It is our duty as American patriots to see that he suffers the consequences of his actions and any persons who aid and abet this criminal should be held likewise accountable.

The first candidate who calls for Bush to be tried for war crimes and/or impeached for subverting the Constitution has my vote.
Posted by red rabbit at 11:02 PM No comments:

Right about now the soul of Jerry Falwell is tapping self-righteously at the pearly gates...

...only to be greeted by a faux-hawk sporting Saint Peter who says, "Hello, Gorgeous!"
Posted by Lenora at 10:27 PM No comments: 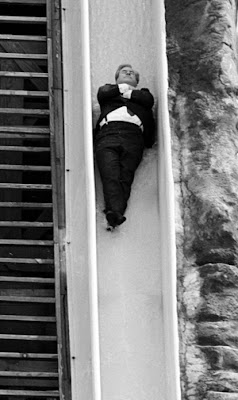 Talk about divine retribution.
Posted by red rabbit at 1:09 PM No comments:


For someone who's never really worked in his life, Bush sure talks alot about what his job is. I imagine this is because he always has people around him—he probably calls them "explainers"—who are constantly explaining his job to him. And like a 6-year-old, he passes this explanation on to the rest of us in exactly the same words.

Guacamole anyone?
Posted by red rabbit at 1:58 PM No comments: