Kate has the awful truth on Wal-mart over at Broken Windows.

WARNING: Reading about Wal-Mart will piss you off. If you need a good laugh afterward go and see who were the 20 Most Annoying Conservatives of 2003. Jesse is so funny that I despair of ever achieving anything in the blogosphere. Cheers mate.
Posted by Lenora at 11:27 PM No comments:

In the most widely published image from his Thanksgiving day trip to Baghdad, the beaming president is wearing an Army workout jacket and surrounded by soldiers as he cradles a huge platter laden with a golden-brown turkey.

The bird is so perfect it looks as if it came from a food magazine, with bunches of grapes and other trimmings completing a Norman Rockwell image that evokes bounty and security in one of the most dangerous parts of the world.

But as a small sign of the many ways the White House maximized the impact of the 2 1/2-hour stop at the Baghdad airport, administration officials said yesterday that Bush picked up a decoration, not a serving plate.

Officials said they did not know the turkey would be there or that Bush would pick it up. A contractor had roasted and primped the turkey to adorn the buffet line, while the 600 soldiers were served from cafeteria-style steam trays, the officials said. They said the bird was not placed there in anticipation of Bush's stealthy visit, and military sources said a trophy turkey is a standard feature of holiday chow lines.


Of course it is possible Bush didn't know that he wasn't holding the real turkey, but...no. You know what? Forget it. I don't have the heart to laugh at this. I'm tired of President Chimpy flinging his crap at us and smirking the entire time.

Please someone, change the channel.

Good piece about liberal professors and conservative students. It took me back to my college days, a scant two years ago. “John” of Bérubé’s class could have any number of standard-issue white blowhards in a few of my own classes. Luckily there weren’t many. I almost wish I had encountered more of them. I was an obnoxious hand-raiser in my own right. “John” would not have lasted long had I been in class with him.

But back to the Bérubé piece.

“John’s” problem isn’t so much that he’s a conservative surrounded by liberals than it is that he is a jerk surrounded by people too polite to call him a jerk to his face.

Actually, some students agreed with John about one thing or another but were simply annoyed that he was taking up so much class time. They began sending me e-mail messages and speaking to me privately about how they did not want John's remarks to set the parameters for class discussion. One student complained that she was wasting time trying to think of things that John wouldn't reply to; another said that he found anti-porn feminism obnoxious, just as John did, but couldn't stand it when people dismissed feminism so sweepingly as to render suspect other people's more careful critiques (his own, for example). If I asked John to cool it, then, he would undoubtedly feel silenced, and I would be in the position of validating what was perhaps, for him, a stifling liberal hegemony over classroom speech; if I failed to restrain him, I would in effect be allowing him to dominate the class, thereby silencing the other students who'd taken the time to speak to me about the problem.

Learning seems to have a ratings system much like movies. In elementary school you get the G-rated version of things. Columbus actually did discover America and was good and kind to the savage Indians. In High School things get a little racier. Well actually Columbus only discovered the West Indies and the Vikings may have gotten here first. By college you should be ready for the ugly truths of colonialism, imperialism, genocide. Triple X stuff. “John” clearly has issues with this and compounds his immature approach to higher learning by throwing a tantrum when the story doesn’t go his way.

…by the time we got in December to Colson Whitehead's 1999 The Intuitionist, a whimsical allegory about racial uplift and the history of elevator inspection, John was complaining that there were no good white characters in the novel. By that point, even I had had enough, and I told him, via e-mail, that his complaint was not only unwarranted on its face but thoroughly beside the point: In this class, I said, we are not in the business of pursuing reductive identity-politics enterprises like looking for "positive images" in literature, regardless of what group images we might be talking about.


Sho ‘nuff. Seriously though. I didn’t have a problem with College Conservatives going after more liberal student groups. That’s part of campus culture, the protests, the counter protests and the rest of us worming through the crowd because we don’t want to be late for class. But trying to dictate department curriculum… ick. I wonder what “John’s” syllabus would look like. Any takers?

Posted by Lenora at 3:00 PM No comments: 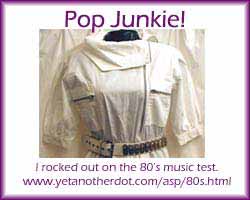 You know you want to.

A 7-year-old boy was scolded and forced to write ``I will never use the word `gay' in school again'' after he told a classmate about his lesbian mother, the American Civil Liberties Union alleged Monday.

Second-grader Marcus McLaurin was waiting for recess Nov. 11 at Ernest Gaullet Elementary School when a classmate asked about Marcus' mother and father, the ACLU said in a complaint.

Marcus responded he had two mothers because his mother is gay. When the other child asked for explanation, Marcus told him: ``Gay is when a girl likes another girl,'' according to the complaint.

A teacher who heard the remark scolded Marcus, telling him ``gay'' was a ``bad word'' and sending him to the principal's office. The following week, Marcus had to come to school early and repeatedly write: ``I will never use the word `gay' in school again.''


This kind of homophobia is bad enough in fellow students, but teachers? Can you spell homeschooling? Poor kid.
Posted by Lenora at 5:26 PM No comments:

I’ve only known one person who died of AIDS. He was my sister’s 6th Grade teacher, a rare mixture of good disciplinarian, good educator, and likable person. One day he was out sick, and then another, and another. The students were told he was in the hospital but we weren’t told why until it was clear that he would not be able to return to teaching. When they told us they also told us that his insurance wouldn’t cover the cost of his medication. We were about to go into production for the Spring Musical, the musical he would have directed. The school wanted the permission of the students to donate the proceeds to our teacher for his treatment.

Looking back it seems kind of amazing that it wasn’t more complicated. It can be a risky thing to appeal to better angels of twelve and thirteen year olds. But it worked. This was 1991 when there weren’t as many medical options and we pretty much believed that if we didn’t help he would die right then and there. So we did it. We raised over $3,000 dollars through our production of the The Wiz. Opening night he was there. He’d lost his hair to chemotherapy by this time but he was up and around. We asked him to stand up at the very end and there were tears running down his cheeks.

Posted by Lenora at 5:25 PM No comments: