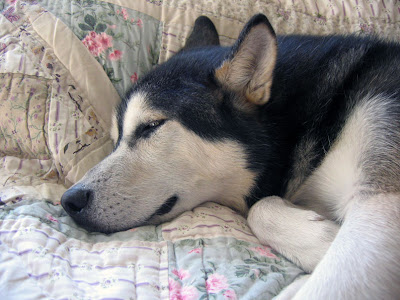 From the archives...when Kodi made our bed his number one spot to spend the day...
Posted by red rabbit at 11:08 AM No comments:

The Obama campaign responded to the news that, Bristol, the 17-year-old daughter of Republican Vice Presidential nominee (and proud NRA member) Sarah’s Packin’, is five months pregnant by telling everyone to “back off.” As reported in the New York Times,

Mr. Obama said the pregnancy “has no relevance to Governor Palin’s performance as a governor or her potential performance as a vice president.” He added that, “my mother had me when she was 18. How a family deals with issues and teen-age children — that shouldn’t be the topic of our politics.”

“So,” he added, “I would strongly urge people to back off these kinds of stories.”

Noble words, but as a friend has pointed out, Obama’s “new politics” has included a healthy dose of these kinds of stories. In The Audacity of Hope Obama writes,

We know that many in the inner city are trapped by their own self-destructive behaviors . . .
. . . perhaps the single biggest thing we could do to reduce [inner-city] poverty is to encourage teenage girls to finish high school and avoid having children out of wedlock. (pp. 255-6)

Shouldn’t Bristol and Baby Daddy Levi have received a stern lecture from Senator Obama? Nope. Fornicatin' and fertile young white people are private family matters, and Barack respects those families. And of course, if you’re not from the “inner city,” getting pregnant when you’re 17 and unwed says nothing about your culture, poor role models, and lack of proper parenting. But if you don't pass the brown bag test, Barack will be ALL up in your business.

...he told a mostly African-American crowd that parents need to shape up, turn off the TV, help their kids with their homework and stop letting them grow fat eating Popeyes chicken for breakfast.
"...Make them go to bed at a reasonable time. Keep them off the streets. Give ' em some breakfast. Come on. ... You know I am right..."

Posted by Anonymous at 1:50 PM No comments:

Partisanship is Off-Limits, too**...

We should probably thank Mother Nature for cutting the US Gulf Coast a little slack by diminishing the strength of Gustav before the storm made landfall earlier this week (‘wish she’d taken it a little easier on the various islands Gustav traversed along the way). Had Gustav hit shore as the slow-moving category 3 or 4 storm it might have been, the story we’re telling now would be much grimmer. Why is this? Well, for one, the US Army Corps of Engineers Hurricane Protection Project for that region “is designed to protect residents between Lake Pontchartrain and the Mississippi River levee from surges in Lake Pontchartrain driven by storms up to the Standard Project Hurricane. The SPH is equivalent to a fast-moving Category 3 hurricane.”

This accounts for the double-speak I thought I heard from a Corps of Engineers spokesman during the storm as he tried to explain why if the storm surge had overtopped, without breaching, the Industrial Canal levees, allowing significant flooding of the 9th Ward, the levees could not be said to have failed. Sounds a little bit like building a too-short fence to keep your livestock in and arguing that if the cows jump over rather than bust through it, the fence will, nonetheless, have done its job.

Why are the specs for the job so low? Money, money, money. Here’s the story from the Corps of Engineers:

FY 2005 BUDGET/EFFORT. The President’s budget for fiscal year 2005 was $3.9 million. Congress increased it to $5.5 million. This was insufficient to fund new construction contracts. Engineering design, and construction supervision and inspection efforts are also included. Seven contracts are being delayed due to lack funds. They include the floodgate at the Canadian National Railroad and the Gulf South Floodwall and Reach 2A and 2B levee enlargement, all in St. Charles Parish; Reach 1 and Reach 4 Levee Enlargements in Jefferson Parish; Pump Station No. 3 Fronting Protection, Robert E. Lee Bridge replacement and the New Orleans East Back Levee enlargement, all in Orleans Parish; and the Bienvenu to Dupre Levee Enlargement in St. Bernard Parish. The Pontchartrain Levee District is providing funds to construct the Gulf South Pipeline floodwall in St. Charles Parish. The East Jefferson Levee District is providing funds to construct the Reach 1 and Reach 4 levee enlargements in Jefferson Parish. Louis Armstrong International Airport is funding the Canadian National Railroad floodgate as part of the rehabilitation of the east-west runway.

FY 2006 BUDGET/EFFORT. The President’s budget for fiscal year 2006 is $3.0 million. This will be insufficient to fund new construction contracts. We could spend $20 million if the funds were provided. These funds are necessary to maintain the project schedule and to meet our contractual and local sponsor commitments.

IMPACTS OF BUDGET SHORTFALL. In Orleans Parish, two major pump stations are threatened by hurricane storm surges. Major contracts need to be awarded to provide fronting protection for them. Also, several levees have settled and need to be raised to provide the design protection. The current funding shortfalls in fiscal year 2005 and fiscal year 2006 will prevent the Corps from addressing these pressing needs.

In 2006 they needed $20 million dollars and the President’s Budget allocated only $3 million!!!

If only our audacious nominee had had the cojones to use Gustav as an opportunity to raise some hard questions about this criminal lack of support to rebuild and protect the Gulf Coast instead of just joining in the cheerleading effort to send aid to evacuees and to coordinate volunteers. Sure, such criticism would have opened him up to charges from Republicans that he was using a potential human disaster to score political points, but the truth about Katrina is that it was a political failing of the first order that goes to the heart of what the Republican party is.

So for those of you who are wondering why we’re so hard on the big O when the real villains on the political scene have red Rs on their chests, let me put it this way: if John McCain can pander to his Republican base by picking Sarah Pray-For-Us as his VP nominee, can’t our guy at least throw us a bone by standing up for something that matters to us?
Posted by red rabbit at 1:46 PM No comments:

Striking resemblance, dontcha think?
ADDED: I can guess at what the likes of Malkin, Dobson, et. al. would be saying if this story broke out about a Democrat's daughter. Somehow I doubt praise for "choosing life in this difficult situation" would come up.
Posted by Lenora at 1:01 PM 3 comments: