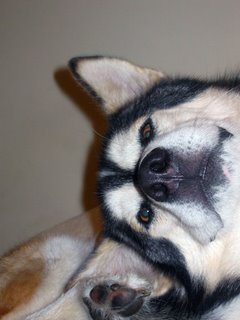 Looking at the world sideways.
Posted by red rabbit at 11:11 PM No comments:

Is the Bloom off the Rose?

David Sirota has probably one of the best pieces I've read to date on Barack Obama in this week's The Nation. The other night, I found myself in political conversation with a group of well-meaning white liberal types in which the inevitable adjective "well-spoken" was used in reference to Obama. For all that we'd like to believe we are above the racial tokenism of the right, there is a certain similarity in the way both sides treat politicians, cabinet members, etc. of color i.e. extra points for charisma, articulateness, and the like. It's annoying because it smacks of a low-grade racial panic. Oh finally, a black person I don't have to grit my teeth to like.

Obama has managed to get a lot of mileage out of his 2004 Democratic Convention speech, but if Sirota's piece is any indication, the tank is low on gas. Sirota points out that Obama shows himself to be more cautious than not.

Then there is the Iraq War. Obama says that during his 2004 election campaign he "loudly and vigorously" opposed the war. As The New Yorker noted, "many had been drawn initially by Obama's early opposition to the invasion." But "when his speech at the antiwar rally in 2002 was quietly removed from his campaign Web site," the magazine reported, "activists found that to be an ominous sign"--one that foreshadowed Obama's first months in the Senate. Indeed, through much of 2005, Obama said little about Iraq, displaying a noticeable deference to Washington's bipartisan foreign policy elite, which had pushed the war. One of Obama's first votes as a senator was to confirm Condoleezza Rice as Secretary of State despite her integral role in pushing the now-debunked propaganda about Iraq's WMD.


In November Obama's reticence on the war ended. Five days after hawkish Democratic Representative Jack Murtha famously called for a withdrawal, Obama gave a speech calling for a drawdown of troops in 2006. "Those of us in Washington have fallen behind the debate that is taking place across America on Iraq," he said. But then he retreated. On Meet the Press in January Obama regurgitated catchphrases often employed by neoconservatives to caricature those demanding a timetable for withdrawal. "It would not be responsible for us to unilaterally and precipitously draw troops down," he said. Then, as polls showed support for the war further eroding, Obama tacked again, giving a speech in May attacking the war and mocking the "idea that somehow if you say the words 'plan for victory' and 'stay the course' over and over and over and over again...that somehow people are not going to notice the 2,400 flag-draped coffins that have arrived at the Dover Air Force Base."

Sirota freely admits to being vulnerable to the Obama personality spell, referring to is "mesmerizing ability to connect with people." It is true that there is something to be said for personality, but I think that Democratic nostalgia for the cult of Clinton has been overall bad for business. Both Gore and Kerry suffered for not having that "zing" thereby exposing the chinks in the Democratic campaign machine. For Sirota to challenge Obama to be the progressive politician and not just look the part shows a degree of chutzpah.
Posted by Lenora at 8:39 AM 1 comment:

We saw Al Gore's An Inconvenient Truth last night. It's a must see (red rabbit may be posting on this later). What I'll say for now is that it underscores my previous post about the immediate need to define a core progressive position upon the belief that government can and must be used to solve certain problems. To be sure, the film leaves us with a host of things we can do as individuals to reduce our personal greenhouse emissions to zero, but there’s no getting around the fact that our failure to act collectively to address global warming by establishing fuel efficiency standards, limiting greenhouse gas emissions, and ratifying the Kyoto treaty stems from having allowed corporate interests rather than the public good determine national priorities.

Democrats have colluded in bringing about this state of affairs, and Paul Krugman gives us insight into how this happens in his Monday column on the way Republicans rhetorically use the phrase “Some Americans believe” (or alternately “other Americans don’t believe”) to attribute to Democrats all sorts of opinions they do not hold. This is to be expected from the Right, but part of our problem is that we get the same treatment from the left side of the aisle. Among the offenders Krugman cites is our own Senator Obama. Krugman writes:

And when Senator Barack Obama told The New Yorker that Americans "don't believe that the main lesson of the past five years is that America is an evil hegemon," he seemed to be implying that influential members of his party believe just that.

Krugman goes on to note, wryly that some might observe “that the alleged influence of the Some is no more real than the problem of flag-burning, that right-wing propagandists are attacking straw men to divert attention from the Bush administration's failures. And they wonder why people like Mr. Obama are helping these propagandists in their work.”

But, hey, this has been Obama’s m.o. from the outset. His much-ballyhooed keynote address at the Democratic National Convention included the following, “Now, don’t get me wrong. The people I meet -- in small towns and big cities, in diners and office parks -- they don’t expect government to solve all their problems,” implying, of course, that Some members of his party do expect this very thing and that the first battle to be waged is against these wild-eyed “Tax and Spenders” about whom the Republicans have warned us. But the truth is, Democrats since the Reagan era have been so intent on proving themselves not to be the stereotypes of Republican propaganda who believe that government should do everything they have systematically compromised all of the things government can and should do by granting loopholes and concessions to the corporate sector. And all that this has gotten us is a government almost unable to do anything—Grover Norquist, for one, is thrilled . . ..
Posted by Anonymous at 3:50 PM 2 comments:

Go Tell it in Las Vegas, the Yearly Kos, or What's a Progressive Anyway?

Las Vegas sounds like it was an important political milepost. Let's hope it produces a pithy formulation of what makes someone a progressive, namely, the commitment to

(1) use public resources and power to make life better for those who live and work in this country, and (2) reduce dramatically the economic inequality between the few who control most of the nation's wealth and the many who actually create it.

All other issues, including, ending the War, protecting abortion, supporting gay marriage, etc., should orbit around these core committments.

If they don't, then we may as well be moderate Republicans, who famously declare themselves conservative on economic issues but liberal when it comes to social issues--and if you haven't noticed, moderate Republicans are an endangered species these days . . .
Posted by Anonymous at 1:10 PM No comments: