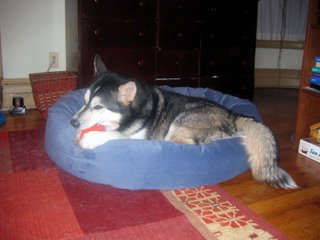 Here's Kodi in what used to be his latest most expensive bed. As with all previous beds the relationship soured when Kodi discovered the fun of the bed isn't in the sleeping but the unstuffing.

President Bush’s job-approval rating has fallen to its lowest mark of his presidency, according to a new Harris Interactive poll. Of 1,003 U.S. adults surveyed in a telephone poll, 29% think Mr. Bush is doing an “excellent or pretty good” job as president, down from 35% in April and significantly lower than 43% in January. Approval ratings for Congress overall also sank, and now stand at 18%.

Champagne and ponies.
Posted by Lenora at 9:44 AM No comments:

Cry me a friggin' river.

Barbara Eherenreich isn't a Democrat. Nor is Salon a Democratic organ, nor the Upper West Side the official Democratic headquarters. Flanagan isn't being attacked by the "Democratic Party," she's just pissy because the "Democratic Party" hasn't mounted a frontal assault against those who disagree with her lifestyle choices. Indeed, this is just an extension of Flanagan's normal romantic arguments to politics: she is a weak, vulnerable women in need of protection. Whether the answer is a strong man or an attentive party, the common problem is always her protested helplessness, which she insists all women share. The Democratic Party did nothing to Flanagan save not take sufficient notice of her assailants. And for that they get lambasted in the pages of Time. Flanagan also writes:

I have made a lifestyle choice that they can't stand, and I'm not cowering in the closet because of it. I'm out, and I'm proud. I am a happy member of an exceedingly "traditional" family. I'm in charge of the house and the kids, my husband is in charge of the finances and the car maintenance, and we all go to church every Sunday.

Her husband is a topflight television executive. She is a writer for The New Yorker. They have a nanny. They are exceedingly rich, and she has to make no tough economic choices between time with the kids and money for the rent. There ain't nothing "traditional" about that.

So sez I. Work-at-home-mom does not equal stay-at-home-mom. It's a fine distinction she can't seem to grasp. Her blindness to that distinction, willful or no, is also in a sense what makes her argument about "choosing" the life of a housewife problematic. Regardless of whether she's at the TIME magazine office, or sitting at home in front of the computer in her bathrobe, Flanagan is still acting as a public person. She is mistaking the domestic sphere as merely her physical space not the intellectual space she inhabits. Because her workspace allows her to pass to and fro between that intellectual public space and that domestic private space she has the luxury of choosing--or rather appearing to choose--the life of a housewife.

One the attractions of a career in writing is the hope of achieving the freedom to work at home and hopefully balance life between career and family. I freely admit that it was on my mind when I decided to go into academia. The reality I’m beginning to find (and this is as a single person ) is that sometimes that clear delineation between workspace and home is necessary both for productivity and for peace of mind. Flanagan would probably do better exploring the pitfalls of this particular problem instead of taking one kind of life choice and calling it another.

As far as claiming to be the “beaten wife of the Democratic Party,” oh please shut the hell up. In the first place--hello--bad metaphor. If it’s meant to be ironic it fails miserably, coming off as both overdramatic and morbid given the context. In the second, as far as people the Democratic Party have left behind, you honey are at the rear of the pack.
Posted by Lenora at 9:25 AM No comments: