(For Red Rabbit, who wondered why I didn’t sign a petition this week to draft Al Gore into the presidential race)

Now that almost everyone, with the exception of the right-wing crazies and NASA chief Michael Griffin, has conceded that global climate change is a crisis, maybe it’s time to send a chill down all our spines by recognizing that many of those currently on the bandwagon of lowered carbon footprints are the same SUV owners who helped tip the climate situation towards disaster. If a recent New York Times article is to be believed, some of these people have even decided it’s possible to have it both ways: “Hundreds of thousands of consumers aren't giving up anything to downsize. Instead, they are simply adding pint-size transportation to their driveways, parked alongside their S.U.V. or pickup” (“And Gas Saver Makes Three in the Driveway” May 26, 2007) Add to this the difficulties that cities like Chicago are experiencing getting state governments to maintain, let alone expand, public transportation systems, and you begin to see what may be the political footprint of this recent movement. Chicago has just proposed dramatic fare increases and service cuts or suspensions to its public transportation system, changes that will disproportionately affect the poor while making public transportation a less attractive option for everyone. But this dismal prospect has hardly been noticed by our global warming set. Even though getting more people on buses, subways, trains would do more to diminish greenhouse gasses than tooling around town in the best of hybrids, we are witnessing a movement whose adherents appear to be more willing to plump down $22,000 for a well-equipped, environmentally friendly vehicle than to support tax increases that would build new transit lines and extend services so that riding public transportation becomes viable for greater numbers of people.
When you consider that SUV owners knew at the time they purchased their gas-guzzling behemoths that petroleum is a nonrenewable fuel source, that auto exhaust is a major pollutant, and that their mini-tanks were more likely than regular sedans to result in fatal injuries to other drivers in accidents, you get an idea of the political calculus being employed here. These safety-conscious consumers are more than willing to pay extra for what they think is best for the health and wellbeing of their families. Of course, if you aren’t wise enough or wealthy enough to do the same for yours, well then, heaven help you. Or to put the matter slightly differently, these are people who view health and safety as luxury goods rather than public goods. Now I could be wrong (and in this case I’d like to be) but if this is the view guiding the current movement, then this hybrid’s going to pull to the right no matter how many times you align the front-end.

None of this is necessarily a knock on Al Gore, who does have the distinction of having taken an idea that the Right had banished to the hinterland of American politics and making it so mainstream that even Rupert Murdoch has cozied up to things green. And Gore has done it in a way that should be a lesson to the other Democratic candidates: By sticking to his guns! But so far there’s little evidence (excepting John Edwards’s healthcare plane) that his counterparts are paying attention. As for Gore, he needs to demonstrate that he’s aware of both the possibilities and limitations of what he’s accomplished so far. If he can bring the same intensity to a broad, progressive agenda then pass me the pen and the petition.


Posted by Anonymous at 3:27 PM No comments: 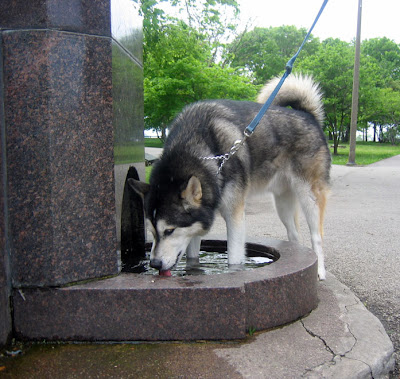 Ahh, water is good after a 5-mile walk. If we didn't keep his water bowl raised up off the floor at home, he'd try to get all 4 paws in it.
Posted by red rabbit at 3:07 PM No comments:

What Shall We Do with a Drunken Failure? 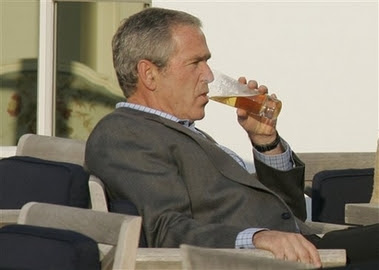 ...early in the morning?

d) Slap him around and call him Suzie