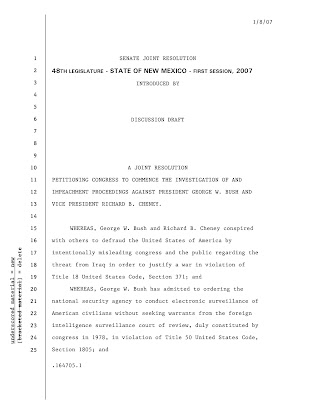 New Mexico State Senator Gerald Ortiz y Pino has agreed to introduce an impeachment resolution for New Mexico next week at the start of the 2007 session.

NOTE: Sec. 603. Inception of impeachment proceedings in the House. This refers to Jefferson's Manual—the House uses it as a supplement to its standing rules.

In the House there are various methods of setting an impeachment in motion:

And it's a twofer—it targets both Bush and Cheney.

Steve links to a New York Post article accusing Barbara Boxer of attacking Condoleezza Rice with below the belt questioning. All's fair in love and war, as they say. Condo clearly does not have the necessary empathy for those who are making the ultimate sacrifice, maybe because she ate her young soon after birth. I know that's a question I would've asked her, were I Senator Boxer.

But as far as Rice having no lovahs...

Ultimately, Baker's political strategy counted on the decisive intervention of one person in the president's closed inner circle -- who sees him alone and could not be kept from him, and on whom he has become dependent for support and trusts implicitly...

What does Sidney Blumenthal mean by "could not be kept from him"? I know what I would mean if I described a relationship that way.

And Sidney goes on in the same Salon piece:

On the other [side] was the president, who had raised her into Baker's seventh-floor office in Foggy Bottom, whom she had flattered as the equal of Lincoln and Churchill, and whom, in a telling Freudian slip, she had referred to as "my husband" before a roomful of reporters and editors of the New York Times.

Her husband? I wonder if they'll be allowed conjugal visits when the revolution comes.
Posted by red rabbit at 1:51 PM No comments: