Time to End It and Not Mend It: The Republican Party, That is . . . 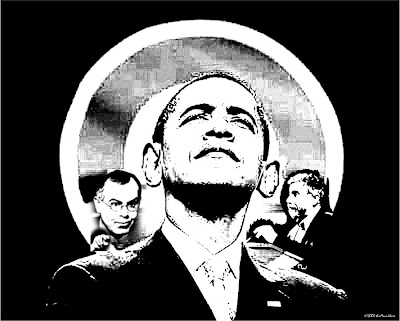 Well, hey folks, I’m back. (I haven’t really gone anywhere, just sitting back and seeing how the Obama era begins to unfold.) It comes as no surprise to readers of this blog that my expectations are not high, but under the circumstances it’s hard not to hope for the best. Yet, alas, signs are not particularly good.

Imagine, if you will the Friday, NYTimes op-ed page, bookended by Paul Krugman’s and David Brooks’s biweekly columns, as an image of Obama staring up at you from your morning breakfast table. In one huge ear a doughy, bespectacled avatar of Brooks whines in an inimitable smarmy voice, "embrace 'a functioning center,'" while in the other, an exasperated Krugman risks tumbling into the massive auricular cavity as he shouts, "Go left young man, your 'attempts to transcend partisanship [have only ] ended up empowering politicians who take their marching orders from Rush Limbaugh.'”

True to form, however, Our Boy Barack, rather than recognizing he has to make a choice is trying to follow the advice of both angel and demon, which in effect means he’ll be listening to Brooks, which also means that he’s trying to save a party that has no justification for continuing to exist as a major force on the American political scene.

Why are there any tax cuts in the proposed stimulus package? Do Republicans really believe that tax cuts will turn the economy around? Well, since some folks believe that Elvis is still alive, perhaps. But whether or not they believe in the efficacy of tax cuts, what they know is that absent a commitment to tax cuts, the Republican party doesn’t exist. That’s why, as Krugman reports in his blog:

Thirty-six out of 41 Republican Senators voted for the proposed DeMint amendment to the stimulus bill — a massive package of permanent tax cuts that would create a huge hole in the budget, while doing very little to help the economy.

Republicans know that if a stimulus plan goes forward without any tax cuts and the economy begins to turn around, the empirical basis for their existence will have simply disappeared. By contrast, a stimulus plan with some tax cuts will allow them to attribute any subsequent success to the presence of tax cuts, whether or not the tax cuts contributed to the turnaround.

So, now is the time to drive a stake through the heart of the political vampire that’s been sucking this country dry ever since Grover Norquist crawled out from some cave during the reign of Reagan with his “Tax-Payer Protection Pledge.”

Obama has the stake in his hand but doesn’t seem inclined to use it.
Posted by Anonymous at 8:39 AM 7 comments: