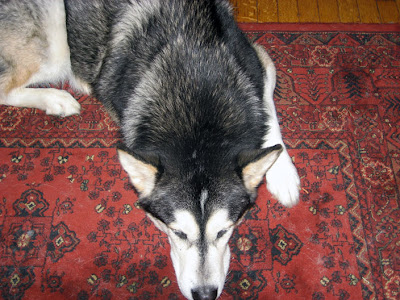 He's been a constipated crybaby since Lenora and Ceds left. Now he can get back to normal eating and walking routines. No more gummy worms. No more Cocoa Puffs. No more screaming gorillas.
Posted by red rabbit at 1:30 PM No comments:

For someone, who, by his own admission "missed the '60s...," Matthew over at 40 Years In The Desert has a very hip analysis of Obama's recent praise for Ronald Reagan. And by "hip" I mean this guy has a clue. He points out astutely that Obama missed the turmoil of the '60s by virtue of being in Hawaii and Jakarta, and that Obama accepts Reagan's view that Big Government was really big and bad and excessive in the '60s, and what was really missing from that decade was clarity, optimism, and dynamic entrepreneurship—all of which were provided by Reagan.

So, to review what Barack Obama believes:
government expenditures in the '60s = bad / Ronald Reagan = good

Let's take a closer look with Matthew Saroff and Phil Gaspar.
Excesses of the '60s:
Clarity, optimism, and "a sense of dynamism and entrepreneurship" provided by Reagan:
A Democrat who admires the "different path" that Ronald Reagan led the country down—this is inspiring?
Posted by red rabbit at 12:53 PM 7 comments: