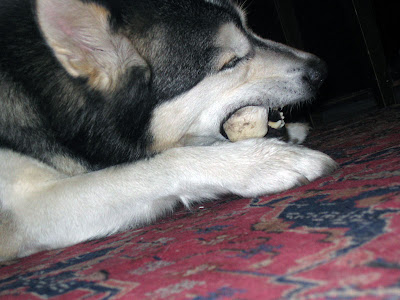 A little rawhide chew...a big cow knuckle...because nobody really wants to brush his teeth.
Posted by red rabbit at 11:24 AM 2 comments:

The View from the Ground 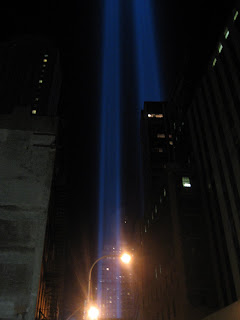 My new apartment is two blocks south of the World Trade Center site. Tonight they turned on the memorial lights to mark the anniversary on Thursday. I always thought the lights were projected from the site but it turns out to be slightly south of where I live. The picture doesn't quite do it justice, but it's a pretty impressive view from where I am . Later this week I'll hopefully get something from the rooftop of my building.
Posted by Lenora at 10:01 PM 1 comment:

Should BHO Be Running Scared?

What a difference a week makes. Last weekend at a decidedly pro-Obama social gathering, the consensus was that McCain had stumbled badly in selecting Sarah Palin as his VP nominee. The news about her daughter’s pregnancy had just broken, along with revelations about Palin’s being investigated for abuse of her gubernatorial power. By contrast the Obama campaign had gotten big props for drawing the largest viewership in history for a campaign convention, an achievement attributed to the savvy use of mobile phones and call lists urging people to watch the big O’s speech. Someone wondered aloud whether McCain had just handed the election to Obama.

Of course, by now we all should have learned never to misunderestimate what can happen when Republican brazenness gets mixed with the collusive tendencies of the mainstream media. Hey, if weapons of mass destruction can seem to appear out of thin air and a decorated war hero be transformed overnight into a battlefield coward, it was clearly going to be no big deal to make a governor of modest accomplishments into the best thing to happen to US politics since the ratification of the 19th Amendment.

Of course, the Dems bear some of the blame (they always do). Their (should I say our?) standard bearer this year is also a man of slender accomplishments, and what the Republicans have “discovered” as evidenced by the catty (is that sexist?) zingers in Palin’s speech is that there’s mileage to be gotten from asking what’s Obama ever done that qualifies him for the presidency? If Palin and the Republicans also discover that the question has even more punch sans the cattiness, then watch out.

For me these days, the Obama candidacy brings to mind a simple-minded but strangely effective cartoon on the old “Animaniacs” show called “Chicken Boo” in which the running gag (a play on the Emperor’s New Clothes) featured a human-sized chicken in minimal disguise, say a hat and a mustache, masquerading as an heroic figure. Each episode would find Chicken Boo surrounded by fawning admirers who would respond with outrage whenever the lone critic shouted out, “He’s just a big chicken!” And each episode would end when Chicken Boo’s “disguise” would fail as his mustache fell off or he’d cluck, astonishing his admirers who would then join the critic in stating what had been obvious from the start.

Obama is just a junior US Senator who was only two years into his first term when he decided to run for President. This doesn’t mean that he can’t be President, but it’s hardly a case that he should be. Those enamored of him have persisted in mentioning him in the same breath as Abraham Lincoln and Martin Luther King, Jr., but he has never steered an organization, let alone a city or nation, through a major cataclysm, nor has he led a real social movement in achieving its objectives. His entire political career has traded on the margin of what he will accomplish when given the opportunity to do something, and up to now his biggest accomplishment has been getting people around him to believe he needs a bigger stage than the one on which he’s currently playing. This isn’t a criticism. It’s the truth. And if his campaign is going to be successful he’s going to have to deal with this.

To be sure, many of his supporters point to the electrifying effect his candidacy has had on both the electorate and the electoral process by bringing into politics legions of citizens who had previously tuned out. But given that Sarah Palin’s acceptance speech drew almost as many viewers as did Obama’s, and did so without the mobile phone gambit, and that the RNC outdrew the DNC in terms of viewership, it’s hard not to wonder if Obama is getting credit for a phenomenon that has little to do directly with him. The electorate may want change, but they’re going to get that whether McCain or Obama wins. Neither man is Bush despite the Dem’s mantra that McCain/Palin means “More of the same.” And Obama’s buttressing of this charge by pointing out that McCain has vowed to appoint Supreme Court justices in the mold of Scalia and Alito shows how ineffective it can be to be right on this point: The only people pissed off about this are the people who are going to vote democratic anyway.

So Obama can’t really run on his record or on the claim that his candidacy is the only one representing change. But the silver lining here, if he recognizes it, is that the only possible winning strategy is to run as a left of center Democrat, which is how he’s going to get painted anyway. He needs to continue to sound the theme that the Republicans have always governed on behalf of the top 5% and that its now time to have an administration that will govern on behalf of the rest of us. He needs to say that his goal is to make the hockey moms of Alaska see that they have more in common with the Mexican immigrant factory workers than with Oil Company CEOs. He needs to say that as a former community organizer who has seen what happens when people in power make decisions that affect the livelihood of thousands of people, he will govern with the knowledge that if you haven’t made the lives of these people better then you haven’t done your job.

Yes, BHO should be running scared. Let's hope this means he'll soon be running left.
Posted by Anonymous at 10:30 AM No comments: