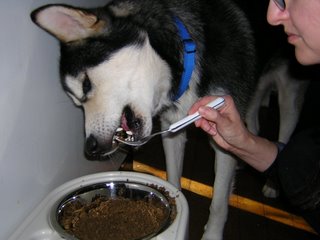 Kodi rarely has to be coaxed to eat in this fashion. He typically employs purely for the sake of attention. As a puppy he was at one point in danger of eating himself to death. A miscommunication on the part of his owners resulted in a week of overfeeding, during which time he became distinctly pearshaped and earned the nickname "Poop Machine." He also effectively wiped out the household supply of plastic bags. It took a while to clue in to this because he ate like he was starving to death. These days he's mellowed out some having been turned on to the wonderful world of people food. Avocado is a particular favorite.
Posted by Lenora at 7:34 PM 1 comment:

Timebomb Atop the Volcano

Sending a bunch of white supremacists off to Iraq might not be such a good idea.


A decade after the Pentagon declared a zero-tolerance policy for racist hate groups, recruiting shortfalls caused by the war in Iraq have allowed "large numbers of neo-Nazis and skinhead extremists" to infiltrate the military, according to a watchdog organization.

Posted by Lenora at 1:31 PM No comments:

Memo to Joe Biden: The Simpsons is not an accurate reflection of reality (link via Atrios).
Posted by Lenora at 3:53 PM No comments: