I'm a million years late to the Friday pet blogging party. Call it laziness or whatever. But here's the pride and joy of the house, Kodiak, seen here in his infancy. In future posts I hope to, with the help of red rabbit, look back fondly over the many mishaps of puppy rearing, and of course keep you updated on current escapades. Suffice to say, that our darling pup has a destructive streak that rivals a certain lil' bastard we all know and love. His kill list includes: two crates (one labeled "gorilla proof"), two giant dog beds, uncountable stuffed toys, at least five pairs of shoes, three milk crates, a lovely expensive Picasso book, at least one paycheck, and several pieces of mail. He hasn't moved to electronics yet, but we have our fingers crossed for this year.
Posted by Lenora at 2:34 PM 1 comment: 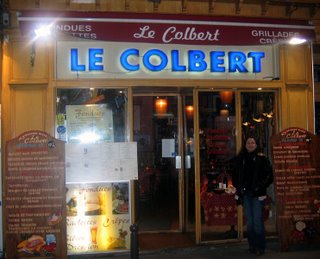 Talk About Missing the Point

I'm going to go ahead and jump in with my two cents about Steven Colbert's performance at the White House Correspondent's dinner. You can see the video here, and Atrios has hightlights here.

First of all Colbert is balsiness personified for entering the vipers' den and refusing to pull punches.

That being said, what the hell were they expecting when they invited him to speak? Methinks the geniuses in DC don't get the joke that is The Colbert Report. It's easy to get lost in the jocularity and over the top bloviating, but if you missed the way in which he eviscerated both Michael Brown and Caitlan Flanagan earlier this month, then you clearly have no idea of how lethal Colbert can be when let loose among the stupid, the cowardly, and the hypocritical. Or rather, you didn't, until now.
Posted by Lenora at 6:33 PM 2 comments: