From Campbell Brown to Jon Stewart to Barack Obama himself, the recent recipe for dealing with the crazies and operatives who’ve dominated the coverage of the health care debate appears to be as follows: Separate the fear mongering about death panels and such nonsense from the “legitimate” concerns about cost, being able to keep one’s current insurance, etc. Then, having sorted one from the other, dismiss the first and address the latter.

I suspect this will work, if by “work” one means helping pave the way to getting some version of a bill passed when Congress returns to session.

But we shouldn’t forget that at the end of the day, the only legitimate concern in the health care debate is this: Will anyone who needs to see a physician or receive a medical procedure be able to get treatment at a nearby health care facility without worrying about how to pay for it?

If the answer is “No”—and it looks like that’s what it will be—then illegitimate concerns will have once again carried the day.
Posted by Anonymous at 9:23 AM No comments: 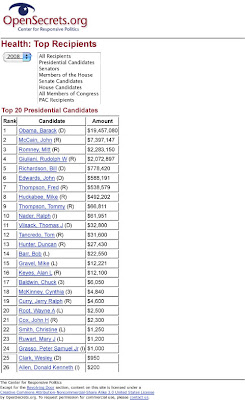 When the makers of the animated film The Incredibles wanted a visceral symbol for our society’s moral turpitude they knew exactly what to do: depict an insurance company executive--single-minded in the pursuit of profit and lacking even the slightest glimmer of sympathy for his fellow humans. The message was so clear that a four-year-old could get it: the only way that insurers make money is by denying claims and coverage to those who need help.

So why is it that on an issue that everybody “gets” immediately, do the big corporate players, including the insurance industry, have the upper hand? Well, as even Frank Rich has now come to see, it’s because those on whom so many counted to smite the mighty, have instead been brokering deals:

As Congressional Quarterly reported last week, industry groups contributed almost $1.8 million in the first six months of 2009 alone to the 18 House members of both parties supervising health care reform, Nancy Pelosi and Steny Hoyer among them.

Add to that the fact that, as OpenSecrets.org has reported, candidate Obama was by far the greatest beneficiary of contributions from the health care sector and the hash being made of health care reform was a foregone conclusion.

To be sure, as many have pointed out, the obnoxious opposition to health care that has torpedoed many townhall meetings was largely manufactured by corporate lobbyists. Even so, the real problem was with the townhalls themselves, which were little more than Administration efforts to palm off the mystery meat in the various congressional health insurance reform bills as the high quality stuff of truly democratic health care. It’s hard to imagine shouting down the wingnuts and paid corporate operatives with chants that amount to “We want Spam!” Yet as even Rich acknowledges in observing that some form of health care reform is likely to pass, Spam is what we’re going to get.

When an Obama-enabler like Rich allows himself to voice a “fear . . . that Obama might be just another corporatist, punking voters much as the Republicans do when they claim to be all for the common guy,” it is tempting to believe that a moment of Liberal /Left-reckoning regarding Obama might be at hand. But two other columns from the Times indicate otherwise.

First, Paul Krugman’s “Averting the Worst” column on Obama’s flawed effort to fix the economy illustrates how difficult it is for Obama’s liberal critics to avoid being boxed in to muttering the mush-mouthed mantra of what Obama support has always been: a plaintive wail that the other guys would have been worse.

Then there’s Barbara Ehrenreich’s indignant account of what amounts to a legislative and policy war against the poor being carried out by states and municipalities across the country. After cataloging the despicable ways that poor people in this country are treated, Ehrenreich’s column concludes:

Maybe we can’t afford the measures that would begin to alleviate America’s growing poverty — affordable housing, good schools, reliable public transportation and so forth. I would argue otherwise, but for now I’d be content with a consensus that, if we can’t afford to truly help the poor, neither can we afford to go on tormenting them.

I have no doubt that Ehrenreich truly believes that we could “afford the measures that would begin to alleviate America’s growing poverty”—but what the hell does this really mean? Let’s roll back poverty rates to what they were two years ago? Whoop-dee-frickin'-doo! But that’s not even where the piece ultimately comes down. Despite the fact that her guy is now in office, Ehrenreich would be content, for the moment, with treating the poor a little better.

What ever else this is, it’s unmistakably a way of telling the guy in charge just how little you’d settle for. And to extend Rich’s somewhat homophobic metaphor, if you tell the big guy on the block that he can punk you for a quarter, don’t be surprised if he pays you only a dime, or perhaps nothing at all, because he probably thinks, when all is said and done, that’s what you wanted in the first place.
Posted by Anonymous at 9:22 AM No comments: