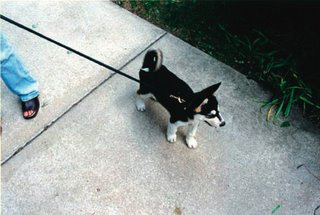 This is one from the Kodi archives. In this picture he's behaving relatively well, but trying to get him to accept the leash was kind of interesting. At first he'd simply sit down and howl and refuse to move. Later, when he realized the the leash meant "park" and "playing with dogs," he accepted the leash but insisted on holding part of it in his mouth in an "I'm not being walked, I'm walking you" move.
Posted by Lenora at 1:07 PM 1 comment:

I was going to blog about Al Gore's appearance on The Daily Show last night simply because it was just a cool interview. But I saw this and all the warm fuzzies went away.

Wait! I'm not the one who said that. According to The Washington Post--yes, yes, MSM "douchebags," I know, I know--a new study by two researchers at East Carolina University found that Stewart's cynicism has the effect of making viewers so disgusted with politics on both sides of the aisle that they feel too discouraged to vote. Constant ridicule seems to have the effect of turning the political system into one gigantic self-parodying freak show, with no sign of imminent change or relief.

That could be why all the pre-election talk about Jon Stewart sending his young viewers--though the average age of a "Daily Show" viewer is actually 47--to the polls in great numbers to vote for Kerry was just that--talk. It simply never happened.

So maybe ridicule and invective, though entertaining, and a refreshing alternative to the mainstream media's passivity and reserve, isn't the boon to democracy it's cracked up to be? Anyway, don't despair, and don't get enraged because that's just the bad news about Stewart. The good news is that he's not a fascist.

Atrios points out the both Siegel and the Post mis-represent the study (big surprise there). I haven't really been tuned into the whole blogofascism debate over the last week or so. My dilletante approach to blogging kinds of disqualifies me from weighing in. But it seems to me that Siegel's approach to both blogging and Stewart are part of the same shorsightedness regarding what's happening in this country regarding politics, media and the like.

This insistence within the MSM upon locating the central nerve system of the leftwing blogosphere betrays a certain amount of anxiety over hierarchical structure. And never mind that the invective coming out of rightwing blogs makes us look downright sweet.

For all the talk about freedom of speech and individual freedom in the United States, ours is actually a hierarchical society in which most people cannot afford to speak out unless they are themselves independently wealthy. A lot of Americans work for corporations, which would just fire anyone who became so outspoken in public as to begin to affect their company's image. Look at how many bloggers are anonymous! Purveyors of opinion in the mass media, who use their real names, are employed by, or in some way backed by, media moguls. It is fairly easy to depart from the spectrum of acceptable opinion (i.e. acceptable to the three million or so people who have disproprotionate weight in how America is run), and if one does, after a while one is not heard from so much any more. Thus, those attacking Kos work for Martin Peretz and Arthur Shulzberger, Jr., and if they didn't they would not have their current influential perches.

The very wealthy are used to getting their way in US politics and to dominating public discourse, since so much can be controlled at choke points. Journalists can just be fired, editors and other movers and shakers bought or intimidated. Look what happened to MSNBC reporter Ashleigh Banfield, who dared complain about the propaganda in the US new media around the Iraq War. Phil Donohue, who presided over MSNBC's most popular talk show, was apparently fired before the war because General Electric and Microsoft knew he would be critical of it, and did not want to take the heat. Politicians who step out of line can just be unseated by giving their opponents funding (the Supreme Court just made it harder to restrict this sort of thing).

A grassroots communication system such as cyberspace poses a profound challenge to the forces of hierarchy and hegemony in American society. Now anyone with an internet connection and some interesting ideas can potentially get a hearing from the public.

Kos and his community, in short, are at the center of a discourse revolution. Now persons making a few tens of thousands of dollars a year can be read by hundreds of thousands of readers with no mediation from media moguls. The old joke had been that anyone can own a newspaper, it only takes a million dollars (a really old joke, since it would take much more).

The lack of choke points in cyberspace means that people like Kos can't just be fired. How then to shut them up? Why, you attempt to ruin their reputation, as a way of scaring off readers and supporters. This technique, as Billmon points out, does not usually work very well in cyberspace itself, though it can be effective if the blogger moves into a bricks and mortar institutional environment where big money and chokeholds work again. A political party is such an environment.

Cyberspace itself, though, is a distributed system, not a centralized one. That is why the charges against Kos are so silly. In essence, creatures of the old choke-point hegemonies are projecting their own hierarchical system inaccurately on Kos. Of course you wouldn't expect people like Peretz or David Brooks to understand what a distributed information system is, dinosaurs as they are, of both politics and media

Very well put although I doubt it is as simple as misunderstanding the nature of networking in cyberspace. There is also a lack of analytical know-how going on. Siegel looking at Kos and the Kossacks is trying to understand something without really trying to understand it. He makes baseless comparisons and rather than looking at Markos's evolution as a blogger, he chooses to play pscychologist and take a patronizing attitude. Blogs began as sites for discussion and the exchange for information. One of the main reasons I started reading blogs is that they quickly exposed how completely fractured the MSM is at the moment. When somebody with a day job and DSL can take a few moments to do a little research that contradicts something written in the Times or the Post, something has clearly gone wrong.

As for his slam on Stewart, give me a friggin' break. Again, Siegel writes like someone who maybe watched one or two episodes. It's true that part of the Stewart's schtick is the whole are-you-sure-you-want-to-know-what-the-goverment's-up-to-'cause-'it-will-make-you-cry thing. But it's not cynicism. If you watch the show regularly you can't miss the thread of true outrage that runs through many of the reports and interviews. But like I said, Siegel can't take the time.
Posted by Lenora at 1:24 PM 1 comment: