It looks like the Republicans will be out in the streets with their sheets and nooses before this election is over. The illustration above appeared in a GOP newsletter in San Bernadino, CA this month.

Diane Fedele, president of the group, said she had no racist intent.

"I never connected," she told the newspaper. "It was just food to me. It didn't mean anything else."

But what else did we expect from the party of Jesse Helms, Strom Thurmond, William Rehnquist, and Ronald Reagan?
Posted by red rabbit at 11:18 AM 14 comments:

An animation of the sun, seen by NASA's Extreme ultraviolet Imaging Telescope (EIT) over the course of 6 days, starting June 27, 2005. (Courtesy of SOHO/EIT consortium) #
Posted by red rabbit at 11:01 PM No comments: 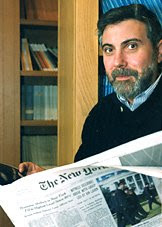 Way to go Professor Krugman! Hmmm...Secretary of the Treasury has a nice ring to it. Are you paying attention Barack?
Posted by red rabbit at 11:12 AM No comments: