Them That's Got Shall Get...

If you were wondering how wealth, income, and power have been, and still are, distributed in the USA than have a look-see at an article by Professor G. William Domhoff, available at the Sociology Dept. at UC Santa Cruz. I've excerpted some of the more upsetting paragraphs, tables, and figures below. 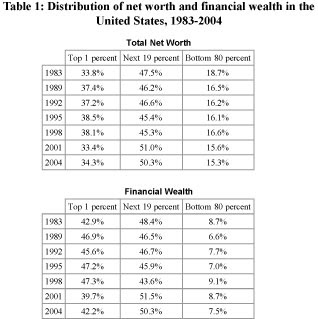 In the United States, wealth is highly concentrated in a relatively few hands. As of 2004, the top 1% of households (the upper class) owned 34.3% of all privately held wealth, and the next 19% (the managerial, professional, and small business stratum) had 50.3%, which means that just 20% of the people owned a remarkable 85%, leaving only 15% of the wealth for the bottom 80% (wage and salary workers). 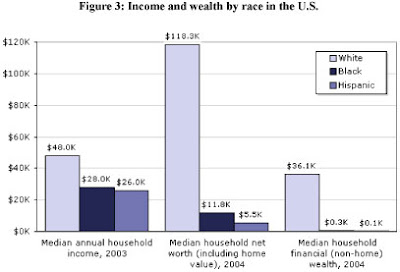 Besides illustrating the significance of home ownership as a measure of wealth, the graph also shows how much worse Black and Latino households are faring overall, whether we are talking about income or net worth. In 2004, the average white household had 10 times as much total wealth as the average African-American household, and 21 times as much as the average Latino household. If we exclude home equity from the calculations and consider only financial wealth, the ratios are more startling: 120:1 and 360:1, respectively. Extrapolating from these figures, we see that 69% of white families' wealth is in the form of their principal residence; for Blacks and Hispanics, the figures are 97% and 98%, respectively. 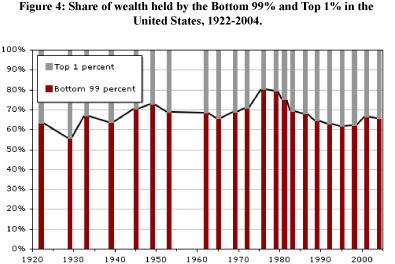 Here are some dramatic facts that sum up how the wealth distribution became even more concentrated between 1983 and 2004, in good part due to the tax cuts for the wealthy and the defeat of labor unions: Of all the new financial wealth created by the American economy in that 21-year-period, fully 42% of it went to the top 1%. A whopping 94% went to the top 20%, which of course means that the bottom 80% received only 6% of all the new financial wealth generated in the United States during the '80s, '90s, and early 2000s (Wolff, 2007).

It's even more revealing to compare the actual rates of increase of the salaries of CEOs and ordinary workers; from 1990 to 2005, CEOs' pay increased almost 300% (adjusted for inflation), while production workers gained a scant 4.3%. The purchasing power of the federal minimum wage actually declined by 9.3%, when inflation is taken into account. These startling results are illustrated in Figure 7. 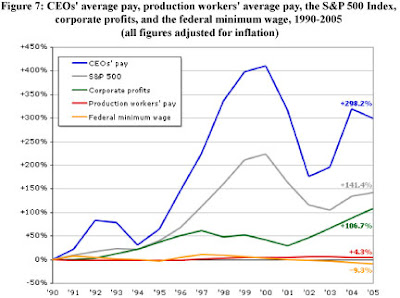 Little duplication in that last paragraph there.

On the substance of the matter, those graphs certainly make it look like government action to soak the rich and redistribute the wealth is justified. So long as the government will actually get the cash out of the rich without the repercussions falling on the people who work for them.

"Soak the rich" and "redistribute the wealth" are such loaded phrases...and as a bonus they impart a certain guilelessness to the "rich" or "wealthy."

One of the prices of capitalism should be a privilege tax, i.e., a tax on those who have the privilege of reaping the lion's share of the benefits of living in a capitalist society.

Whatever happened to the great power = great responsibility equation? Or is that just a comicbook sentiment?